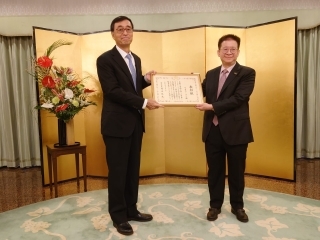 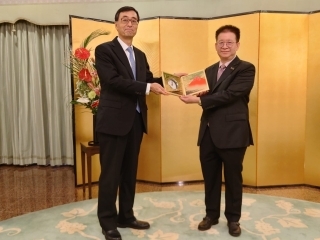 This award is in honour of his dedication to the promotion of friendly relations between Japan and Singapore through the arts and film.

With over thirty years’ experience in the media industry, Mr. Tan has held top management positions in Mediacorp, Golden Village, and the Info-communications Media Development Authority. In 1983, he worked on his very first Japanese Film Festival with the Embassy of Japan in Singapore. Since then, he has worked continuously to strengthen generations of partnerships between Singaporean and Japanese creative and co-organising partners including The Japan Foundation and Japan Creative Centre. His efforts have strengthened the presence of Japanese films in Singapore over the years.

The Foreign Minister’s Commendation is awarded to individuals and groups with outstanding achievements in international fields to acknowledge their contributions to the promotion of friendship between Japan and other countries. The Commendation also aims to promote understanding and support of the Japanese public for the activities of the recipients.